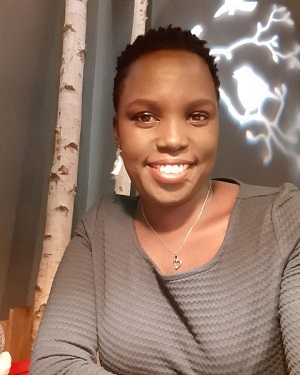 Having acquired a law degree in Kenya and with more than four years of experience working as an admitted lawyer and in managerial positions in Kenya, Angella Kerubo relocated to Germany in 2015.

After seeking for advice from the Profession Recognition Authorities in Germany, Angella was adviced to pursue a Masters programme which is the only possible way to have the foreign degree recognised. This is what led her to join Steinbeis University Berlin in 2016 for the Master's Degree in International Business Law. This was the optimal way on how combining both degrees would have her foreign qualifications recognised in Germany. During this time, she also enrolled for German language lessons upto C1.

Since she needed to have the exposure of the legal language, Angella approached a Law firm which granted her an opportunity to intern with the company. This helped her gain first hand experience in the German Corporate Law. During the internship, the Lawyer she worked with handed her a legal dictionery which helped alot in acquiring the legal terminologies needed in the legal sector. Angella successfully graduated in 2018 and managed to join adidas in Germany. She is currently working as a Privacy Counsel in Data Protection. Never give up in life. Always try out all the possible ways. “It always seems impossible until it’s done.” ―Nelson Mandela. Watch her inspirational video below!

We use cookies on our website. Some of them are essential for the operation of the site, while others help us to improve this site and the user experience (tracking cookies). You can decide for yourself whether you want to allow cookies or not. Please note that if you reject them, you may not be able to use all the functionalities of the site.